SCHOOL OF ARTS AND SOCIAL SCIENCES 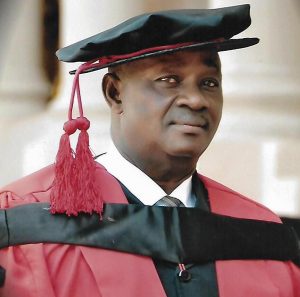 Dr. Amadi, Cletus Okechukwu hails from Aku, Igbo-Etiti Local Government Area of Enugu State. He is about sixty three years old. He is also married with four children (2 boys and 2 girls). His work experience spanned from the early 70’s immediately after his secondary school education.

Thereafter, Dr. Amadi went for a Post Graduate Diploma in Public Administration, obtained it, and proceeded to do a Master of Science Degree in Political Science at the Enugu State University of Science and Technology where he graduated in 1999.

Not satisfied with all these, he enrolled for the Doctor of Philosophy (Ph.D.) programme and bagged it in the year 2014, March. Today, he lectures at the Institute of Ecumenical Education Thinkers Corner Enugu, and also as an Adjunct Lecturer at the Enugu State University of Science and Technology, Enugu.

He is the Dean of School for Secondary Education, Arts and Social Sciences of the Institute as well as the Head, Department of Political Science.

On his work experience, he served as a Primary school Teacher from 1979 to June, 1995 and later became an Education Officer in July, 1995. He was later made the Education Secretary of Igbo-Etiti Local Government Area from August 2003 to January, 2012 before he retired from active government service as a Director on GL 169 in August, 2014 after thirty five (35 years) of meritorious service to Enugu State.

PHILOSOPHY FOR ARTS AND SOCIAL SCIENCES:

Man, his complex nature and the increasingly more complex society in which he lives, and his relationship with the metaphysical world (expressed in myths and religions) have been interesting subjects for investigation by scholars. Using various instruments (qualitative and quantitative, or a combination of both), the Arts and Social Sciences disciplines have sought to answer the basic questions concerning man, his society and his relationship with the metaphysical world. The NCE Arts and Social sciences programmes seek to draw the teacher and his student into a mutual dialogue about their collective realities.

The goals of the Arts and Social Sciences programmes include the following:

i).         To produce NCE teachers of Arts and Social Sciences subjects who are capable of contributing meaningfully to the production of teachers of those subjects for the Basic Education in Nigeria.

ii).        To help the students acquire the basic knowledge and values needed to enhance the quality of their lives and the life of the nation.

iii).       To help the students acquire the spirit of self-reliance, positive self-image and balanced personality.

DEPARTMENT UNDER THE SCHOOL OF SECONDARY EDUCATION, ARTS AND SOCIAL SCIENCES:

41st Matriculation of the Institute.